Book Review: Kwanzaa: From Holiday to Every Day 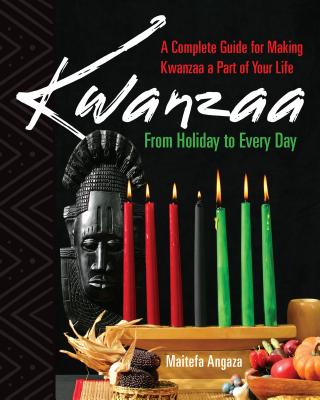 Read a Description of Kwanzaa: From Holiday to Every Day

’One of the reasons Kwanzaa has been widely embraced is that it speaks directly to the need many feel for a self-determining way of engaging the world. In observing a holiday created by a man of African ancestry as a contribution to his people and to the world, we claim the hard-won freedoms paid for by the sacrifices of all our forebears’

At Kwanzaa time we look within to determine where we are on our life's journey, where we stand in relation to our community, and what we've done to advance those values we hold highest. We do this both singularly, in the sanctuary of our quiet moments, and together with family, friends, and colleagues during joyous celebrations.

These private and public reflections help us to set our compasses for the year ahead; although our mistakes may give pause, when contemplating our blessings, we give thanks.’
’Excerpted from Chapter One (pages 9 & 13)

Created by Dr. Ron Karenga in 1966, Kwanzaa was conceived with the hope that black people would explore ’the rich resources of traditional African culture and ethics in their quest for liberated minds and lives.’ Very much a child of the Civil Rights Movement, the new holiday was initially met with considerable resistance due to its then being viewed as a Pan African alternative to Christmas, given that it was celebrated during the same season, between December 26th and January 1st.

However, over the intervening years, Kwanzaa has not only been embraced by millions of African-Americans but come to be recognized by the mainstream culture. For instance, in 1997, the U.S. Postal Service issued its first postal stamp commemorating the holiday, and it has since been positively acknowledged by President Bush in a supportive Kwanzaa message. Plus, there's now ’the Spirit of Kwanzaa,’ an annual event staged at the Kennedy Center in Washington, DC.

So, it only makes sense that a how-to guide like Kwanzaa: From Holiday to Everyday would come along. Written by Maitefa Angaza, the Managing Editor of African Voices, a black literary magazine, this handy guide explains every aspect of Kwanzaa, from its African roots, to its seven principles, to the ceremony, songs and feast, including recipes.

While you might be unfamiliar with many of the African dishes, which have been culled from such countries as Cameroon, Zanzibar and Senegal, the instructions seem straightforward enough that you might enjoy making something unfamiliar to your palate. Otherwise, there are traditional West Indian and Southern soul food staples to pick from, including Caribbean rice and peas, sweet potato pone, collard greens, macaroni salad, cornbread and biscuits.

Though it might be worth the investment for that chapter alone, this is far more than a cookbook. The author's aim is not only to encourage folks to observe Kwanzaa during the seven days of the holiday's season, but also to inspire observers to keep it alive year-round by finding ways to put the seven principles (Unity, Self-Determination, Collective Work and Responsibility, Cooperative Economics, Purpose, Creativity and Faith) into practice on a daily basis.

A valuable resource for both novice and veteran Kwanzaa keepers!

Read Dafina’s description of Kwanzaa: From Holiday to Every Day.