Book Review: The Roots of Rap: 16 Bars on the 4 Pillars of Hip-Hop 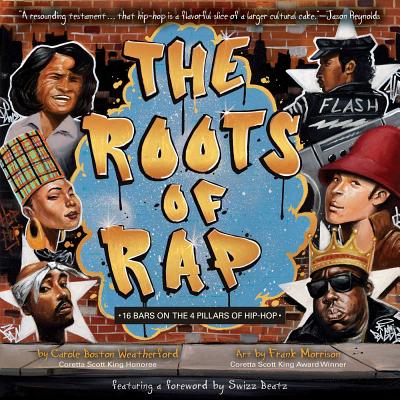 Read a Description of The Roots of Rap: 16 Bars on the 4 Pillars of Hip-Hop

Hip-Hop is a culture that has spanned generations and has become worldwide. It found its humble beginnings in some of the roughest trenches, deep in the Bronx. It was created by the people for the people! Founded out of a relentless effort to be heard, a coolness. and most importantly truth. It gave a voice to the mistreated and unheard. The genre of music that it created (rap), would go on to create the careers of some of the most influential people in pop culture, from Tupac, to Nas, to Kendrick Lamar, and so many more. Rap and Hip-Hop culture has financially and mentally freed the people who occupy it.

In Carole Boston Weatherford’s children’s book The Roots of Rap, Weatherford depicts the unique history of rap music and all the progenitors who made it into the success it is today. Through Weatherford’s catchy word play and intricate writing style, you really get a taste of Hip-Hop flavor. Weatherford’s words read as an alluring song, that will contiguously get stuck in your mind. With Weatherford’s wording, your child is sure to learn how to rhyme.

Hip-Hop culture has become the world’s culture, with classes being taught in some of the most prestigious colleges from Howard, to Harvard. This book that will open a young person’s eyes to the beauty that is Hip-Hop culture and rap music. It will teach children about a culture that was created for people who look just like them to be able to exist fully and in all of their glory. Not only does Weatherford’s book teach children about the importance of creativity, but it also teaches children about the importance of imagination and truth. Creativity, imagination, and truth are all things that your child will need to be able to excel in this world.

With all of the amazing art by Frank Morrison your child’s mind is free to run wild, and every page, is a different and introspective scene in which emphasizes to Weatherford’s story telling. Morrison uses different hues and unique brush strokes to paint and capture the beautiful and deep-rooted stories of Hip-Hop. Every page is a pop of color and full of little intricate details, that is sure to keep your child flipping back and forth.

In the book Weatherford makes it a point to use Hip-Hop verbiage/vernacular, like B-boy, homey, phat, shorty, and many more to show the beauty of the culture and the unique slang that it has created, and although it may be difficult for your child to understand the proper meaning of some of these words. Weatherford made sure to include a little glossary at the end of the book, so that your child can learn and be completely immersed in everything Hip-Hop.

One of the most interesting things about the book comes at the end, in the author’s and illustrator’s notes: both Weatherford and Morrison talk about their experience with Hip-Hop culture and rap. It is a simple, yet poignant sentiment for all children to read and fully get an understanding of just how amazing Hip-Hop and rap is and how it has inspired so many.

Read Little Bee Books’s description of The Roots of Rap: 16 Bars on the 4 Pillars of Hip-Hop.