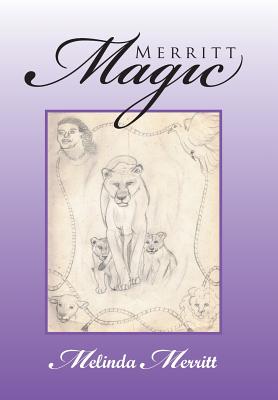 Read a Description of Merritt Magic

Melinda Merritt’s nonfiction book, Merritt Magic, is a publication that defies category. In these pages, the reader will discover a reflective, mythical volume, combining biography, history, spirituality, politics, and religion. The author, a daughter of wealth and higher education, does not apologize for her life of privilege but she proclaims to be a willing student of traditional ancient African ancestral knowledge, mythical wisdom, and magic. She credits the Sages, the all-knowing spiritual guides invisible to the material world, with the alchemy of protecting and influencing her life.

Born in Americus, Georgia at the end of the Pieces Age, Merritt realizes that she is grateful for her very blessed family and circumstances that shields her somewhat from the rigid Jim Crow existence of most Southern Blacks. As she writes: “Our world was filled with happiness, excitement, and surprise.” Her father, an independent successful business leader, is a credit to her community.

The Sages tells the family about the importance of the African past, the reality of the captured souls, and the humanity of those who tried to escape their chained torment. She learns about the honor, pride, and sacrifice of those who gave them the gifts of sacrifice and survival. They add: “You cannot leave your past,” despite the published history about Africa by white scholars taught in schools.

Merritt touts the coping mechanisms, resilience, and adaptability of the people of color imprisoned by politics, culture, and society. “There is never conversation about the different kinds of African people who were caught in the slave trade,” she writes. “The white people said that all the people were savages and that was not true. The individuality of the families seems to be unnoticed and lumped together in a nondescript nothingness.”

Nasty and vulgar words by racist whites plays a part in dehumanizing and threatening Blacks. She reflects on “the white man’s behavior” toward people of color providing a negative power of language and actions to alter our thinking and behavior. Superiority and privilege rules out that all people are God’s creation and under the influence of the Supreme Divine Spiritual Energy, she writes.

Often, Merritt’s tone is angry, not willing to excuse the racist white superiority attitude. “Because of the white man’s real evil self, God will intervene. Because the leaders of this country built a “house” on the misery of a race of people, then the foundation is not sound and, therefore it will not stand.”

Sometimes her ire is directed to the cultural and sexual defects within our community. “The only woman who will be able to transmit this unique Divine Spiritual Energy is the black woman,” she notes. “The black man will have little say-so in this matter. One of the reasons why the black man could be out of this elevation is because that have failed us in too many ways. They were sent to protect us and they have failed severely in that area. There are still good black men, but far too few to impress the Creator.”

Merritt pays tribute to her mother and grandmother with giving her, shielding her from the defeated attitude of some Blacks. As she reflects, she grew up without a fear of whites, only curiosity. She truly believes women were the spiritual force and seed of the Universe. Also, she acknowledges her life would not be so ordered and blessed if it had not been for her grandmother and mother. Furthermore, she adds the women and the Sages kept hope alive in the community of Blacks.

Her father, a carpenter and owner of two grocery stores, is respected by the community. He thought her six children should know how to earn money, and be self-sufficient. He bought them a typewriter and a lawn mower for the boys so money could be earned all year around. “If you work for others, they will decide your worth,” her father suggests. “If you work for yourself, you will decide your worth.”

As an advocate of the Black Women Magic, Merritt lists some of the “warrior angels representing the Creator: Moms Mabley, Madam Marie LaVeau, Madam C. J. Walker, Michelle Obama, Mahalia Jackson, Serena and Venus Williams, Beyonce, and Grandma Barnum. However, she adds that Black women have been “misjudged, misunderstood, and mislabeled.” In this society, she admits our women were falsely compared to white women or “the Stepford Wives or the ever so popular trophy wives.”

Her concept of Black Women Magic involves a deep belief of a power to engage angels, who would help Black women. The angels would help the Sages to assist Black women in their needs and would never reject those in distress. The angels train her through the wisdom of the trip of Mother, Maa Sis and Maa Dove. They teach to flow easily in the natural laws.

Also, she links the Merritt Magic partly due to her Grandpa Dave and his wife, Blanche. The tall, dark-skinned man, who smoked Cuban cigars, is known by reputation, even by the whites. Another family, Phil, the sixth child, provided her with an introduction of the civil rights movement in the 1960s. She considers Phil “fearless and strange.” He introduced her to Dr. Martin Luther King and all of the freedom fighters. The leaders often hung out at her family’s home. She recalls the movement as “plenty of great men who spoke truth,” adding Dr. King was “such a mesmerizing man.”

Merritt, who was arrested at age 12, sees the social and political promise brought to her town by the King, Jackson, and Young. She recognizes the “power of human will and energy firsthand.” As a so-called expert of human energy, she feels she was born in a magical family, able to observe many “firsts” in American history. Jim Crow broken and on its last legs.

“We were a people who gathered our energies and devised such a force of energy, we would and could not be stopped,” Merritt writes. “The whites had everything on their side and still could not crush our energy nor power. We had only thing going for us. God. Come to think of it, it is all you need. Black people of America proved that.”

Emotionally rewarding and insightful, Merritt reveals a stunning cultural and spiritual terrain that elevates the critical racial and sexual issues of this divided country. She skillfully crafts a work packed with compassion, passion, and scholarship. Read it. Discuss it. There is truth and wonder to discover in these pages.