Book Review: Sinking Saints: Ten Reasons Why Judgment Must Begin in the House of God 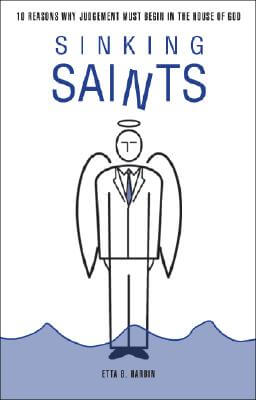 by Etta B. Harbin

Read a Description of Sinking Saints: Ten Reasons Why Judgment Must Begin in the House of God

Author Etta Harbin outlines the ten most important reasons that the 21st century church is on the brink of self-destruction while offering real solutions to the problem of the seemingly acceptance of sin in the Christian church.  Although I am sure that the author welcomes the secular world's absorption of this work; she clearly is speaking to the body of Christ, the Christians in church in this book, Sinking Saints: Ten Reasons Why Judgment Must Begin In The House of God.

This book can be likened to a modern-day Ten Commandment as the information is presented as a ’must do’ for all Christians who desire to live holy and in compliance with the Word of God.  One of the unique aspects of this book is that every area of concern that she addresses is supported by Scripture; references from the Bible to prove her points.

Current media stories have been full of expos's of Christians gone wild.  Accounts of well-known ministers and lay persons with secret sins that have come full circle giving much credence to the need for a book of this type.  Etta Harbin doesn't mince words, nor does she put on white gloves as she takes on the task of cleaning up the sins of the church. She goes past encouragement, challenges her brethren to denounce their wicked ways and follow the word of God.

She also calls out the church leadership, labeling them ’Promised Land Preachers’   She questions the role high profile ministers who have recently emerged with  mega churches that have incomes that rival many corporate entities in the secular world. Her book asks how will these ministers deal with those who have come seeking spiritual enlightenment when their focus seems to be on acquiring material possessions.  She compares these preachers to the prophets in Ezekiel 22:25.

She gives Christians a way out of this type of  superstar/fan relationship by laying out a seven-component framework for Pastor/Laymen relationships based on Psalms 23.

Component one advises Christians to align themselves with a God-led pastor who will shepherd you rather than fleece you, a man who lives a life based on the Word of God.  The remaining six components include: Physical Sustenance, those who have a handle on the needs of their members; Restoration, through communicating with God by fasting; praying; Bible study; meditation and adhering to God's Word; Guidance; Protection; Comfort; and, most importantly, Spiritual Enlightenment.  She advises that without these seven components in the relationship with their pastor, a Christian is being ill-served and should move on and seek them elsewhere.

Wives of the clergy, known as The First Lady, do not escape the author's wrath.  She disagrees the way most churches hold the ministers' wives in higher regard.  She also brings closure to equality among the sexes in the church and in Christian marriages beginning with what God had in mind when he created the relationship between Adam and Eve in The Garden of Eden.

She speaks to true believers warning why the impending judgment of God is upon the Christian Church as we currently know it.  She seeks salvation for the church in offering practical solutions that will cleanse and heal the church from it's well known secret sins.

Sinking Saints is going to anger many church people. ’A lotta of hit dogs are gonna holler’ to quote an old folk's saying. There is truth in Etta B. Harbin's book and many true Christians will take heed and agree that the Church has become too lax, turning a blind eye to sin and coming too close to acceptance of sinful ways.

Written in a ’let me tell you something’ style, the author took care in choosing her wording, touching on almost every aspect of the Christian church with clarity. In my opinion, Sinking Saints has earned a place on the bookshelf of every Christian home.

Read Tate Publishing & Enterprises, LLC’s description of Sinking Saints: Ten Reasons Why Judgment Must Begin in the House of God.