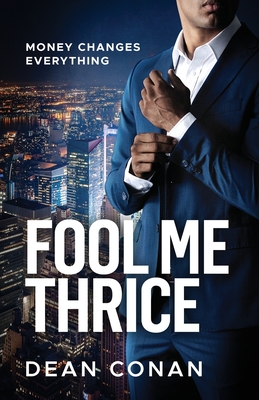 Read a Description of Fool Me Thrice: Money Changes Everything

“No doubt, I was born a sucker—a sucker for a hot girl with a smile, that is. I have to admit I was abused by every gold-digger I came across. For as long as I can remember, I’ve chased the kitty, and it took me losing all my belongings to realize I had a problem.” So opens Conan’s sexy caustic tale of love, loss, and revenge, and what happens when they intertwine.

In Fool Me Thrice: Money Changes Everything, women are types who fall into categories, all of which revolve around money—mostly trying to get Charlie Mo’s money. Regardless if they are a former best friend, fixer, businesswoman, spiritualist, Christian, stripper, or Daddy’s girl, these types are all calculating, gold-diggers who use sex to achieve their aim.

Charles Fuller, Jr. known as Charles, the Mortician, or Charlie Mo for short, came into his family’s fortune after his parents were killed the night of his High School graduation by a drunk driver, his nemesis Dickie Beale. To add to Charlie’s trauma, because of his well-connected parents Dickie got off with only losing his license and a minor probation. After his parents’ death, Charlie, a pampered only child, was left with more money that he knew what to do with, and he only knew one thing to do with money. “I had no one around to remind me that the love of money was nowhere near as important as true love itself. Needles to say, it didn’t take long for my life to spiral out of control.”

The Fuller Funeral Parlor was the most successful mortuary in Houston, Texas, and Charlie Mo, the sheltered spoiled 21-year-old heir, with little to no impulse control, is woefully ill-equipped to handle his inheritance. Not long after his parents passing Charlie has plowed through the millions of dollars left to him. “With me in charge, the Fuller Funeral Home stayed on life support. I was too distracted for business and too determined to be with the next girl. No doubt, I wasn’t nearly as good with the parlor as my pops had been. My incompetence buried the family’s good image almost overnight.”

Charlie Mo soon finds himself broke and working for the city sanitation department under the supervision of his manager Tin-Can Stan—during work, his singing and clanging of the cans earned him the nickname. Tin-Can becomes something of a father figure to him. After accepting an invitation to dinner Charlie is surprised by Stan’s wealth. He has a large well-appointed home and history with Charlie’s dad. Charlie finds himself spending more and more time with Tin-Can’s family, and quickly falls for his daughter Gabby. At the same time he reconnects with his old friend, former tomboy Meghan who has filled out in all the right places. Charlie is smitten, at first mostly because she’s hot, but as luck would have it she’s dating his drug-dealing cousin Ron, who lives down the hall from him. This doesn’t stop Charlie, whose lack of both impulse control and common sense, makes him an easy target. He finds himself in a sexual relationship with both women and is equally torn between them. The choice is made even more difficult when he discovers that his father knew that he would burn through his inheritance and he set aside two million dollars in a trust fund for him when he turns 22, which will be in six months.

One day at work, Charlie recounts his past exploits with gold-diggers Mercedes, Chardonnay, Cinnamon, and Sweet Sugar Sarah to Tin-Can.

But will Charlie learn from his past and make better choices or is he doomed to repeat his mistakes and be fooled again?

Filled with sexual escapades and double entendres Fool Me Thrice is a light and fairly fast-paced read. If you don’t already know much about life and relationships, you might gain some insight: “Rich is loud. Wealthy is quiet.” And “Love was an action word. You can always tell how much someone loves you by their actions.” As I got to the rather convoluted twist ending, (which to Conan’s credit, I didn’t see coming) I kept wondering what did these women he had trysts with see in him to begin with? The answer is money. That’s what Charlie had to offer and why he kept running into the same type of woman. For him, it was a self-fulfilling prophecy.

Fool Me Thrice, is a sexy story of how we can lose ourselves looking for love, if we think we have only one thing to offer. Although somewhat entertaining, if you are closer to 50 than 25, and have a more nuanced and layered understanding of relationships you won’t find much new here. But if you want a spicy and fairly fast read, light on emotional analysis and heavy on sexual escapades, this might be for you. Because with Fool Me Thrice: Money Changes Everything, what is lost in Charlie’s lessons, is that in life, money does change everything, if money is what is most important to the people involved.