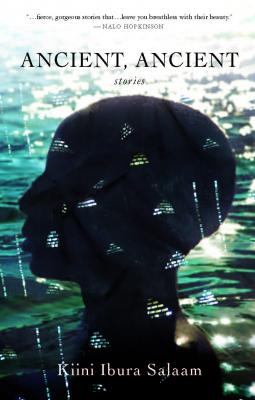 Imagine fodder for an African-themed Twilight Zone movie or perhaps an idea for a late night movie on the Sci-Fi Channel on the Dark Continent. When reading Kiini Ibura Salaam’s short story collection, “Ancient, Ancient,” one can’t help but make the comparison.

Salaam’s new book may be unlike anything you’ve ever read before. It commences with “Desire,” a tale of half-human creatures who much like humans give in to forbidden desires despite their commitments.

In “Of Wings, Nectar, and Ancestors,” the other-worldly main character, WaLiLa, is given the assignment of retrieving nectar from human men. What exactly is nectar? Perhaps its sweat or saliva or maybe it’s just a man’s sexual energy. Just know that she has to have it. What’s interesting about this story is the character’s Terminator-like vision. Just by looking at a man, she can tell his age and ethnic background; and of course, if he is a prime candidate for releasing the nectar.

“MalKai’s Last Seduction” is similar to “Of Wings, Nectar, and Ancestors” except this one has a homosexual theme. In it, the main character, MalKai, recalls his first sensual experience which is the foundation of who he is today. When a new, other-worldly being brings out his true desires, he has no choice but to give in.

The collection’s title story, “Ancient, Ancient” is a bit different from the rest of the lot. While many of the beings in this collection have a connection to moths, this story of a woman named Asima who for some strange reason bursts into flames, is connected to a migration of ants.

“Ancient, Ancient” is not a page turner per se. It’s not that it’s a bad read. In fact, Salaam’s prose is oftentimes beautiful to read. And each piece contains a bit of poetry. The reason it’s not a page turner is because it’s so different, it may leave you somewhat confused. One must take time to soak up and examine each story. If you haven’t been exposed to this type of writing, which can be described as African storytelling with a touch of poetic verse, erotica, science fiction and spiritual themes, then each story may indeed have you scratching your head and asking questions. Questions like: What’s up with the moths? Was that really a part snake, part human? What’s up with all the poetry?

Kiini Ibura Salaam is obviously a talented writer. The stories in this book are sensual, unique, and thought-provoking. In fact, it’s easy to imagine many of the stories as the basis for short films instead of a book. Many of the stories that deal with issues of sexuality, desire, and even revenge (including some not mentioned in this review) will have you wishing they were expanded into a novel. The downside is just as you’re getting to know a character like “WaLiLa“, the protagonist in Of Wings, Nectar, and Ancestors,” with Terminator-like skills and a soft heart for humans, it’s time to move on to the next story.

Take a chance on “Ancient, Ancient.” And keep your eye out for what’s coming next with Kiini Ibura Salaam.