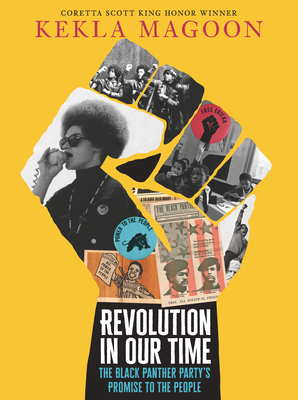 Revolution in Our Time: The Black Panther Party’s Promise to the People
by Kekla Magoon

Read an Excerpt from Revolution in Our Time: The Black Panther Party’s Promise to the People

With passion and precision, Kekla Magoon relays an essential account of the Black Panthers—as militant revolutionaries and as human rights advocates working to defend and protect their community.

In this comprehensive, inspiring, and all-too-relevant history of the Black Panther Party, Kekla Magoon introduces readers to the Panthers’ community activism, grounded in the concept of self-defense, which taught Black Americans how to protect and support themselves in a country that treated them like second-class citizens. For too long the Panthers’ story has been a footnote to the civil rights movement rather than what it was: a revolutionary socialist movement that drew thousands of members—mostly women—and became the target of one of the most sustained repression efforts ever made by the U.S. government against its own citizens.

Revolution in Our Time puts the Panthers in the proper context of Black American history, from the first arrival of enslaved people to the Black Lives Matter movement of today. Kekla Magoon’s eye-opening work invites a new generation of readers grappling with injustices in the United States to learn from the Panthers’ history and courage, inspiring them to take their own place in the ongoing fight for justice.

Kekla Magoon is a national treasure, and Revolution in Our Time passionately and meticulously details a critical truth that is both feared and necessary in the classroom.
—Rita Williams-Garcia, award-winning author of A Sitting in St. James

More books like Revolution in Our Time: The Black Panther Party’s Promise to the People may be found by selecting the categories below: