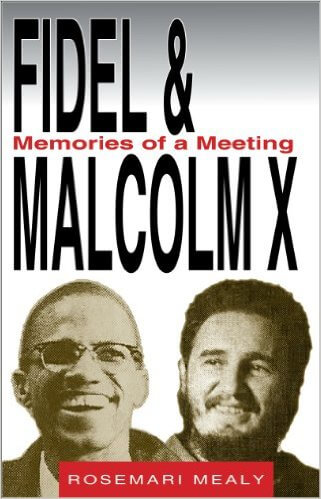 Fidel & Malcolm X: Memories of a Meeting
by Rosemari Mealy

Castro and his delegation had come to New York to attend the UN General Assembly, but the management of the Manhattan hotel they had booked refused to house them. Upon learning of their plight, Malcolm invited the Cuban emissaries to come uptown to Harlem, where he claimed they would be greeted with open arms.

Indeed, Harlemites by the thousands gave Castro a rousing, even magnificent welcome, keeping a round-the-clock vigil in the pouring rain outside his balcony window. To Harlem’s masses, unfazed by the red baiting and anti-Cuba hysteria of the day, Castro was that bearded revolutionary who had told White America to go to hell. They crowded the streets to see and cheer the Cuban delegation and its then thirty-four-year-old revolutionary leader. 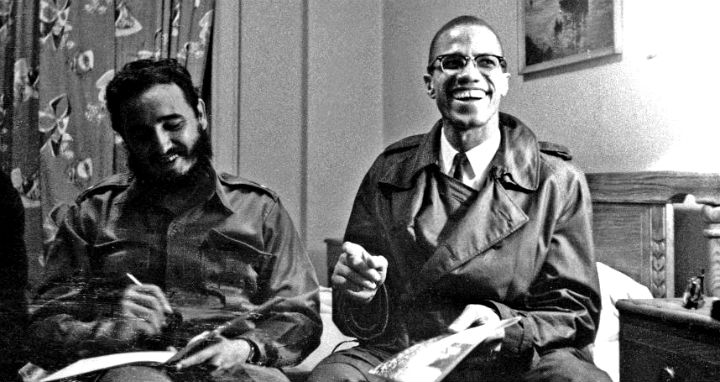 Sadly, however, little is said, even today, about the far-reaching conversations that took place between Malcolm and Fidel that September evening. Only three newsmen were allowed to join them: two representatives and a photographer from the Negro press. They noted that the two leaders exchanged pleasantries, then spoke candidly, through their interpreters, about self-determination and national liberation. Though language differences proved a formidable barrier, author Rosemari Mealy maintains that the respect that both men expressed towards each other…solidified the ties of friendship between the Cuban revolution and the relentless struggles of the African American people.

In this slim yet significant volume, Mealy, along with contributors Elombe Brath, LeRoi Jones (Amiri Baraka), Sarah E. Wright, and Bill Epton, compile the recollections of a number of persons who played important roles in this historic summit. They add to these their own perspectives as historians, poets, journalists, and political activists on the two leaders and the revolutionary movements they spawned. The combined reflections, coupled with Malcolm’s and Fidel’s own writings about the encounter and rare photographs of the two men together, yield an authentic accounting of a remarkable meeting of the minds.