My Besties 3: The Downfall by Asia Hill 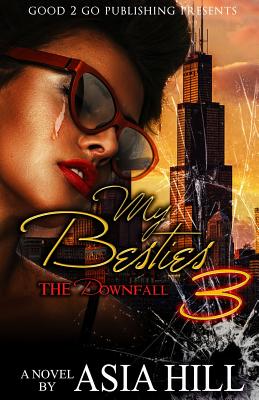 My Besties 3: The Downfall
by Asia Hill

Book Description:
Ja’ziya (JuJu) has blood on her hands. At least the law says so. After her best friend Tiki and Aunt Tae are "knocked off" police apprehend Ja’ziya for both murders. But her Eastside Crazy Crew cohorts Dirty E and ReRe know different. They suspect their sworn enemy Lil Man is behind the takedown of their associate. Lil Man wants to destroy the ECC and everyone connected to them. Even going so far as to employ the services of corrupt cops. Now with Ja’ziya’s trial looming Lil Man’s testimony could put her away for life. But not if Dirty E and ReRe find him first. Nor are they the only ones hunting for Lil Man. So is local gangster Young Meech. Who’s seen those closest to him snuffed out at the hands of Lil Man. Meech wants to return the favor before he kills Lil Man, personally. But his vengeance is delayed when tragedy hits close to home, forcing Meech to choose between doing the right thing… and taking his pound of flesh. One thing however is certain, before all the players involved can move forward Lil Man… must die.

More books like My Besties 3: The Downfall may be found by selecting the categories below: