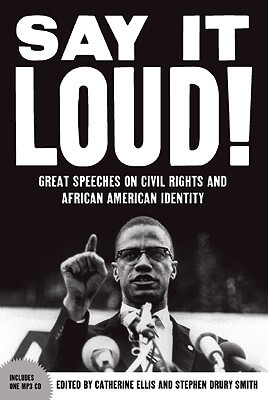 Read a Description of Say It Loud: Great Speeches On Civil Rights And African American Identity

"This is the second anthology of great speeches by African-Americans meant for the eye and ear. Our first book/CD project, Say It Plain, chronicled an array of black leaders across the 20th Century exhorting the nation to make good on its promise of democracy.

Say It Loud is titled after the classic 1969 James Brown anthem "Say It Loud, I'm Black and I'm Proud." This anthology is meant to illuminate the evolution of ideas and debates pulsing through the black freedom struggle from the 1960s to the present and the way these arguments are suffused with basic questions about what it means to be black in America."
—Excerpted from the Preface (pg. ix)

Five years ago, Catherine Ellis and Stephen Drury Smith published an anthology comprised of many of the greatest civil rights speeches delivered by African-American leaders in the 20th Century [Say It Plain: Live Recordings of the 20th Century's Great African-American Speeches: A Book-and-CD Set], including classic orations by Dr. Martin Luther King, Stokely Carmichael, Thurgood Marshall, Minister Louis Farrakhan, Julian Bond and Fannie Lou Hamer, to name a few. Now, the authors are publishing book number two, but the question becomes, what do you do for an encore when you've already used up a lot of the best stuff?

Well, it looks like maybe you look over to the right, politically, and add to the mix addresses by some relatively-conservative black folks to feature next to the usual suspects such as Dr. King, Malcolm X, Roy Wilkins, Bobby Seale and Angela Davis. What does it mean when alongside these firebrands we find the words of Colin Powell, Condoleezza Rice and Ward Connerly, who built his career by appealing not to fellow African-Americans but to right-wing white zealots?

The text delivers an almost whiplash effect when you go from Malcolm's urgent call for the right to vote or violent revolution in "The Ballot or the Bulle" to Connerly's Uncle Tom-like, if heartfelt, answer to the inquiry "Why is this black man leading the effort to eliminate affirmative action?"

The opus appropriately closes with Barack Obama's campaign-saving speech from March of 2008 when the then presidential hopeful claimed he could no more disown Reverend Wright than his racist grandmother. How historic could that be if he proceeded to throw his minister of under the bus a couple of weeks later? It's like Dr. King changing his mind about his March on Washington summation about judging people not by the color of their skin but by the content of their character.

A bonus is that the book arrives with a CD containing excerpts of each of the speeches except one (Ossie Davis' eulogy for Malcolm X). Overall, an alternately worthy and bizarre sequel suggesting we've actually arrived at a post- racial utopia where black liberal and conservative luminaries deserve equal time.