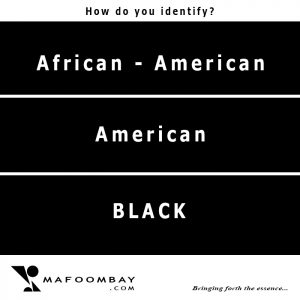 Definitely not American.  Our society has a long way for this "unthinkality."  Just imagine, "500 Americans have so far been killed in Chicago this year..."  It's almost laughable.  It’s unimaginable, grouping us all together in this fashion.  But shouldn’t we be?  American is simply, White American.  Let’s face it, it is.  But I do have hope, I never imagined having a Black President....

African-American.  To me it's like the new "negro."  Non-threatening, soft, 'light in the ass.'  This term diminishes the strength of Black people and I believe the media uses it specifically for that purpose.  There are many Blacks in America without African ties (that’s not taking into account we’re ALL from Africa, but that’s a whole 'mother' story) so the African part just refers to ‘having Black skin.’  And also, African-American has no cultural value.  Unlike Italian-American, Asian-American, Native American, Blacks have no heritage or motherland to connect to to display pride and unification throughout the world.  Blacks, in general, are the newest breed of humans on the planet.

The term Black has historically been condemned.  The rhetoric of blackballed, blacklisted, blackmail, black lie, black prince, black heart, etc. as negativity, evokes a scornful look, or frown, upon anyone that uses any term that involves the word ‘Black.’  So think about it, in the english language, adjectives precede nouns so any use of the word Black before the noun, has already produced a negative effect.  Black man, Black woman, Black child, etc.  The same thing.  Not all cultures and languages utilize this method.  But here in America, it’s taught.  And that teaching has instilled a lasting negativity that has been embedded in our cultural DNA.

Out of the huts of history's shame
I rise
Up from a past that's rooted in pain
I rise
I'm a black ocean, leaping and wide,
Welling and swelling I bear in the tide.
Leaving behind nights of terror and fear
I rise
Into a daybreak that's wondrously clear
I rise
Bringing the gifts that my ancestors gave,
I am the dream and the hope of the slave.
I rise
I rise
I rise.