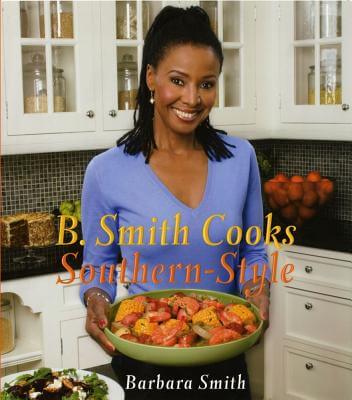 B. Smith Cooks Southern-Style
by B. Smith

Book Description:
Barbara Smith, the famed fashion model who was the first African American to appear on the cover of Mademoiselle magazine, went on to build an empire that includes television shows, restaurants, her own furniture line (another first for an African American woman), and other lifestyle products from rugs to kitchenware. Called "one of the most formidable rivals of Martha Stewart" by The Wall Street Journal, Barbara Smith not only shattered glass ceilings, she also brought America a casual, elegant, easy style that is all her own. With B. Smith Cooks Southern-Style, Barbara focuses solely on the food - no table settings, no party plans - and gives readers more than 200 recipes and tales from her incomparable career. Readers and cooks will be surprised: for a skinny girl, she knows her way around cornbread, fritters, and pain perdu. She also knows and passes on lots of tips and strategies for bringing down the calorie count without losing flavor. From Cajun and Creole to Soul Food and beyond - including some of the many ways to use smoked pig - Barbara treats the home cook to a mouthwatering tour of Southern cuisine. Crave the classic Southern white meat? Barbara gives Catfish Fingers a tweak with a Guinness-flavored tartar sauce. Many iconic dishes of the American South are here - Frogmore Stew, Jambalaya, Kentucky Burgoo, and touffee, along with updated versions of old favorites such as Vegetarian touffee, Chocolate Chip Dessert Sliders, and Bananas Foster converted into a sundae. Barbara even gives up the recipe for Swamp Thang, a riff on favorite Southern flavors and a perennial selection at her restaurants. As The New York Times Magazine noted, "B. Smith’s goal is to get you looking good and having fun" And with dishes such as Root Beer Barbecued Pulled Pork, Collard Greens Slaw, and Coconut-Pecan Cupcakes, how could you not have fun?

More books like B. Smith Cooks Southern-Style may be found by selecting the categories below: