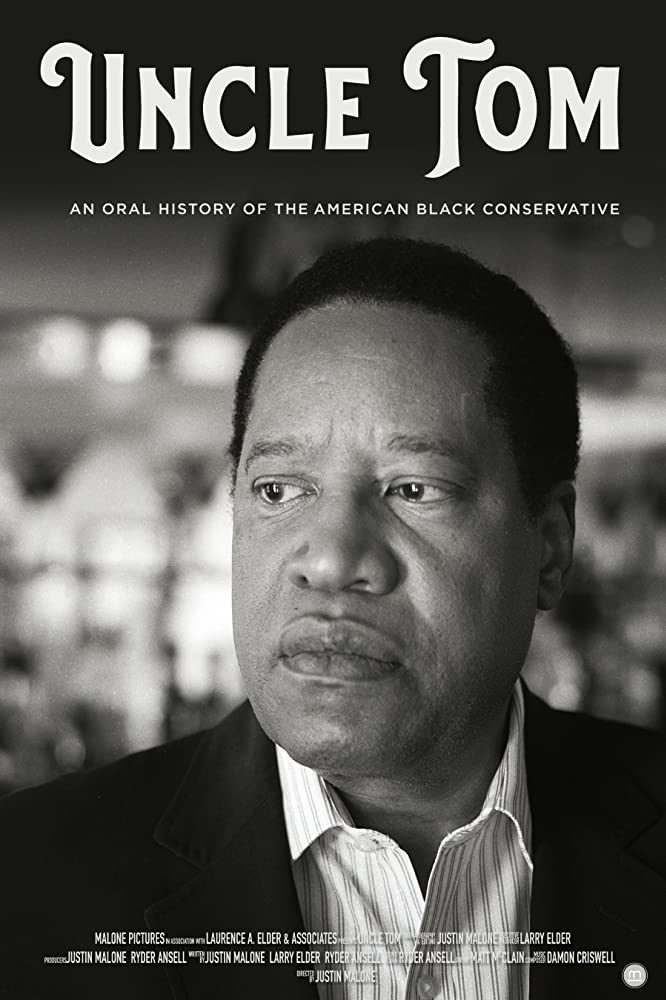 I was made aware of the Uncle Tom movie during a protracted discussion, on our discussion forum, about a conversation between Black Republican Candice Owens and progressive Professor, Marc Lamont Hill. I told the Brother @daniellegfny, who recommended the film,

“The movie is $20 to watch online. So I’ll pass for now, but feel free to relate the salient points.”

That was only partially true; the reality is that I could not imagine that there would be anything presented in the film that I did not already know.

Larry Elder, who is prominently featured in the film, considers himself a student of Thomas Sowell I’ve read several of Sowell’s books and enjoyed reading, for years, a syndicated column Sowell wrote, “Random Thoughts on the Passing Scene.” Sowell, who has a Ph.D. in Economics from the University of Chicago, is revered in conservative circles. Sowell has helped me think about issues of race in a different way. I always respected, though not always agreed with, his perspective.

Undeterred by my initial reaction to decline to watch the movie, @daniellegfny replied;

“I saw the movie when it was first released. If $20 is too much for you I was [sic] send you the money to watch the full movie. You make lots of assumptions and assertions. None of which have any basis in reality.”

Ignoring the condescension, which often occurs on discussion forums, I took @daniellegfny up on his offer to watch the film and told him I’d even consider writing a review of the movie.

The film’s strength is derived from tapping into the humanity of the Black people showcased. All Black conservatives are not the self-hating negroes that many on the political left sometimes make them out to be. They are people who trust in the American system. They believe the Democrat’s focus on racism is a unworthy distraction which is preventing Black people from being successful in this country. They believe, getting an education, not breaking the law, and raising children in a two-parent households, are the real the keys to building wealth and succeeding in the country. It is a compelling argument.

The film does have several important weaknesses; there is an strong bias in how liberals are portrayed relative to how conservatives are portrayed; the film reinforces the false narrative that the Democratic party is still the party of the Klan, and the Republican party is still the party of Abraham Lincoln; and it ignores the impact that slavery and Jim Crow has had on Black Americans. Each of these weaknesses stretch the definition of “documentary.” The film would be more accurately described as propaganda.

All the Republicans are shown as thoughtful, caring, highly articulate, hardworking, and self reliant. It was easy to sympathize with them. The contractor, apparently running his own business, accurately pointed out being called an Uncle Tom, just shows the person did not read Harriett Beecher Stowe’s novel Uncle Tom’s Cabin. Indeed, there was nothing to hate about this young man. Elder was portrayed as the picture of success dripping with wealth and power. The shot of him getting dressed in a closet bigger than many bedrooms emphasized the point. Herman Cain even challenged detractors to compare their bank accounts with his.

In stark contrast the liberals were universally shown to be irrationally emotional, reactionary, and looking to the government to solve all their problems without accepting an ounce of personal responsibility. The, taken out of context, clips of liberal commentators in tears or shouting angrily was hard to watch, because it was a such a harsh distortion of Black Democrats in general. The film asserted, quite strongly, that Barack Obama was responsible for the racial strike that we see in this country today and that is it worse than it has even been. This idea is absurd on its face, but to make this assertion after witnessing the Trump presidency is ludicrous.

One of the film’s biggest flaws is pushing the idea that the Democratic Party is historically the party of the Klan, and that it was the Republican’s that freed the slaves and was responsible for helping to pass the Civil Rights legislation. This may be true, but these political parties have dramatically changed over the past 150 years. The Democratic party is no longer the part of Andrew Jackson and supporters of slavery; today it is the party of Barack Obama. The Republican Party is no longer the party of Lincoln; today it is the party of Donald Trump. It was surprising the filmmakers portrayed the parties the way they were in the 19th century, when they are clearly different today.

There are disparities, often great, between Black and white people in wealth, educational outcomes, incarceration rates, home ownership rates, income, and many other factors of success. Knowing the people on the short end of these crucial factors for life outcomes are also the descendants of people who endured over 200 years of enslavement, followed by 100 years of Jim Crow and domestic terrorism are Black, makes it difficult to rationalize the position emphasized in the film that hard work is all that Black people need to succeed in this country. Hard work has never been a weakness of Black people, institutionalized racism has.

The notion, asserted by the film, that Black people would benefit from less government involvement is compelling given that the U.S government’s treatment of Black people has been beyond tragic for most of its existence. However, dramatically reducing the government’s power should not be the principle concern. We need better government, one who efficiently fairly protects and serves the people. If it turn out we can accomplish this with a smaller government fine, but if it needs to be bigger that is fine too. The problems we have in this country will not correct themselves. Ignoring injustices, like institutionalized racism, will guarantee these problems will never be correctly addressed and remedied.

I don’t believe any of the Black conservatives showcased in the film are self-hating negroes. They align more with conservative fiscal or social values and are able to compartmentalize all the negatives aspects of the Republican party – the way progressives must do with the negatives of the Democratic party.

Uncle Tom will certainly inspire current Black conservatives. I can see people cheering for Candice Owens, the last face you see just before credits roll. Affirming the worldview of current conservatives is both the film’s strength and its weakness. Black progressives and Democrats are very unlikely to convert to the Republican party after watching this film — it way too biased to do that. I can only hope that people who watch the film will see the humanity in the farmer, the contractor, and the other ordinary conservative people highlighted. If Black people can’t work together, despite our party affiliations, we will hamper our ability to succeed as individuals and never improve conditions for ourselves collectively, as Black Americans.

Candice Owens and Herman Cain, despite being two of the most strident and visible Black proponents of the Republican Party, neither were mentioned during the 2020 Republican National Convention.

Uncle Tom’s character, from Harriet Beecher Stowe’s novel is based uponJosiah Henson. Henson published a memoir in 1876, Uncle Tom’s Story of His Life: An Autobiography of the Rev. Josiah Henson.