2017, 2016, and 2015 were terrific years for African American books.  The National Book Awards and The Pulitzer Prize honored more African American writers than any three year period before—and 2017 isn’t over yet.

Some of the largest and most active book clubs do a tremendous job recognizing Black literary talent that might otherwise go unnoticed.  For example, for over a quarter of a century, the Go on Girl! book club has chosen excellent books for their reading list which is enjoyed by the hundreds of readers that make up their national book club. Even smaller clubs have a meaningful impact on helping to promote and raise awareness of Black writers.

Relatively newer entities like the African Americans on the Move Book Club and the African American Literary Awards Show are having a keen impact on Black Books by increasing the level of excitement surrounding Black books with their national award shows which recognize not just Black books, but publishing professionals as well.

There are scores of independent bookstores and online booksellers who continue to do the work of connecting readers with the books they will enjoy.

I have just introduced a new section on AALBC.com which highlights The Most Critically Acclaimed Books. This section of the site aggregates all of the books published that have earned multiple honors.  The books are listed across all genres, by year, and represent the best of the best.

The screen shot below shows below an example of one of the most critically acclaimed books of 2015, Between The World And Me by Ta-Nehisi Coates. Among many accolades, Between The World And Me won a 2015 National Book Award, won an NAACP Image Award, was a finalist for a 2016 Pulitzer Prize, is a 7 time AALBC.com bestselling book, and was selected for 2 prominent Book Club’s reading lists, making it one of the most of the most acclaimed books published in the 21st century. 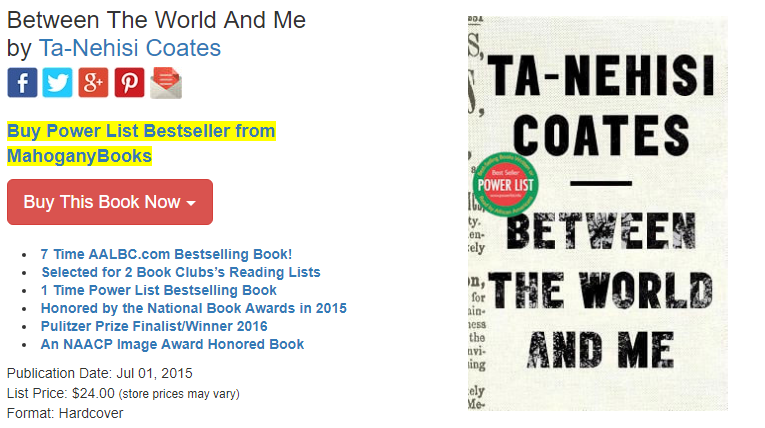 I hope readers are able to use this growing list of books to discover some terrific reads they may have missed.

Of course, with the near monopoly of Amazon and the lack of platforms who highlight African American literature, the business of Black book’s is struggling, but the literature itself is doing quite well.

It is reasonable to argue that African American literature would be doing even better if the businesses that supported the literature were thriving.  Indeed, this is an argument that I make on a daily basis.  Good, potentially great, writers aren’t being published.  The excellent books which are are being published are failing to reach their audience.

To compound matters, the booksellers and publications that survive and want to support Black literature are not utilized or supported sufficiently to be as effective as they can be.

As a result, it is not unusual for an avid reader to say, “there are simply not enough good books being published.”  Again, this speaks not to a dearth quality literature, but inefficiencies in the Black book ecosystem.

It is AALBC.com’s mission to celebrate Black literature and to address the weaknesses in the black book ecosystem.  Will you help me?

Learn what motivated this article.