When you ask Google Home’s Smart Assistant to “Name some African American websites,”  Google pulls the information from AALBC.

While Google cite’s AALBC as the source, I would be much happier if Google compensated me for the expense and time required to create the list of websites.  If AALBC’s information is good enough to reference on a service for which people pay, shouldn’t AALBC.com be compensated?

Honesty, I don’t mind Google, or anyone, sharing the information — indeed I encourage it; part of AALBC’s mission is to promote independent, Black-owned, websites.  However, if a potentially trillion corporation (market cap $805B as of October 8, 2018) is using the results of AALBC’s research to enhance their services, AALBC should be compensated.

Google presents the same information information on their search engine results page (see screenshot below).  Google calls these “Featured Snippets,” and encourages developers to markup their HTML to make it easier for Google to pull this information from their webpages and create these Featured Snippets. 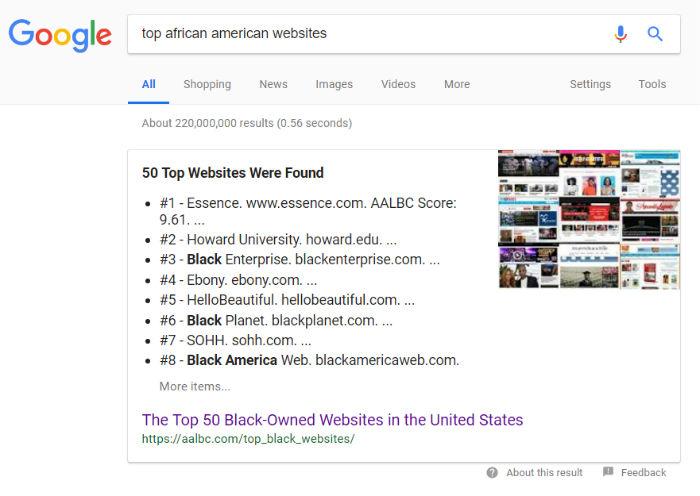 Google argues this provides the “best search experience” for their visitors. This may be true, but Google’s use of AALBC’s content is also robbing us of traffic we would have received if Google’s search engine simply returned search results and did not put so much of our website’s content right on the SERP.

AALBC’s revenue is directly related to traffic.  The more traffic AALBC gets the more opportunities we have to sell books, services, and advertising. This traffic, and the resulting business, gives us the resources to research and maintain lists like, African American websites, that Google freely uses anytime it wants.

I’ve argued for years that Google putting their own bookstore on the SERP page has all but killed Black book websites.

AALBC is not the only site impacted.  I recently read an article on the New York Times (Sept. 19, 2018), “The Big Secret of Celebrity Wealth.”  This article was very informative, because it is how I learned that Google is using these Featured Snippets on their Home devices, as the video and screenshot shared above illustrates.

The Times article goes on to explain that Celebrity Net Worth’s information is used by Google anytime someone asks the question, “How much is _______ worth?” I was already aware that Google were using Celebrity Net Worth’s data, because I’d previously read an article on The Outline (April 17, 2017), “How Google Eats a Business Whole.”

I reached out to Celebrity Net Worth’s CEO, Brian Warner, and explained that I observed a similar effect thanks to Google putting it’s own bookstore in the search engine results page.  There aren’t too many people who can appreciate the harm Google is causing and it was refreshing to talk to someone who does.

Brian encouraged me to reach out to The Outline, who ultimately ran a similar story about AALBC, “Google is jeopardizing African-American literature sites.” While the article made some important points, it also provided an unusually harsh and factually inaccurate critique of the website.  After some back and forth I was able to get some of the inaccurate information about the AALBC removed. Despite that experience, I’m still glad the article was published, because people can always judge AALBC for themselves.

I don’t, and perhaps can’t know, how much of AALBC’s content Google is using on the Home services and search engine.  As a result, the financial impact on AALBC’s can not be easily quantified.

Some will argue that I should be very happy that Google is prominently placing AALBC’s content directly at the top of their search engine results page and citing AALBC as a source on their Home service, as this promotes AALBC. I won’t argue that point, because in today’s environment this is true.

However this promotion comes at a cost, a cost I’m certain exceeds any benefit I would be receiving if Google simply provided search results and compensating AALBC when they used information from the site.  There are fewer websites creating content like, “The Top 50 African American Websites,” because of the environment Google has helped create. In fact, if current trends continues I’ll be hard pressed to find 50 Black-owned indie sites to include in my list.

Consider how Google exploits Wikipedia’s to the hilt; over 5 years ago I wrote an article, “The Pimping of Wikipedia: Contributing to the Decline of the World Wide Web.” Today Google continues to make liberal use of Wikipedia’s information, not just in their Featured Snippets and Home service, but Google also uses Wikipedia’s images and biographies for the author information in their own book store!  Now if I copied Wikipedia’s information directly, as Google does, Google would bury AALBC in their search results — rendering AALBC undiscoverable, because Google penalizes websites that copy content from other websites.

Since Google is monetizing Wikipedia’s content, one has to wonder why is Wikipedia always soliciting contributions?  I will never give Wikipedia a dime. Why should I pay to subsidize the creation of content that Google will use to generate enormous wealth?

This is just one of many reasons wealth inequality has greatly increased not just on the web, but in America as a whole. Today a handful of massive corporations exert monopolistic control over the World Wide Web.  The writers and editors who generate the content on Wikipedia, for example, are expected to volunteer their services while Google gets rich off the content.

Don’t for one second think that because users get answers from Google for “free” that there is some net societal benefit here; there isn’t.

As websites are weakened by Google using their content without compensation, or permission, the ability of these websites to produce quality content is diminished and we all are less well off as a result.

Meanwhile, Google still relies on the information these sites provide and quality of Google’s answers suffers — often with comical, or tragic, results depending upon your perspective.