Garvey and Garveyism, a well known classic that has been out of print for more than 3 decades, is essential for readers seeking to understand Black Power and the Garvey movement. 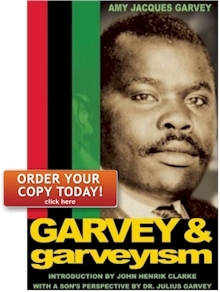 Like all great dreamers and planners, Marcus Garvey (August 17, 1887 to June 10, 1940) dreamed and planned ahead of his time and his peoples’ ability to understand the significance of his life’s work. A set of circumstances, mostly created by the world colonial powers, crushed this dreamer, but not his dreams. Due to persistence and years of sacrifice of Mrs. Amy Jacques Garvey, widow of Marcus Garvey, a large body of work by and about this great nationalist leader has been preserved and can be made available to a new generation of black people who have the power to turn his dreams into realities. —From the introduction by John Henrik Clarke.

Written as a participant and confidant, Amy Jacques Garvey’s perspective continues to provide an intimate and first-person narrative of the Garvey movement and this important nascent period of Black Nationalism. 364 pages. (Black Classic Press, August 2014, ISBN: 978-1-57478-116-8, $24.95).

Amy Jacques Garvey (1896-1973) was a leading Pan-Africanist and Black Nationalist, as well as the wife of Marcus Garvey, and founder of the Universal Negro Improvement Association and the African Communities’ League (UNIA-ACL). Born in Jamaica, Amy Jacques moved to the United States in 1917, became a committed Garveyite and Garvey’s personal secretary. She later served as Secretary General of the UNIA, and as a columnist for the organization’s paper, the Negro World. She married Garvey in 1922 and provided key leadership for the UNIA during his imprisonment and later expulsion from the United States. Following his death in 1940, Mrs. Garvey, then living in Jamaica, raised their two sons, Marcus, Jr., and Julius, and continued to support African leaders and Pan-Africanist organizations. In addition to preserving critical documents on the Garvey movement, she authored essential books on Marcus Garvey and the movement he led, including The Philosophy and Opinions of Marcus Garvey, Garvey and Garveyism, and Black Power in America. Writing as a participant and confidant, Amy Jacques Garvey’s perspective continues to provide an intimate and first-person narrative of the Garvey movement and this important nascent period of Black Nationalism.

John Henrik Clarke (1915-1998) published over 50 short stories in the United States and abroad. His best known short story, “The Boy Who Painted Christ Black,” has been translated into more than a dozen languages. His articles and conference papers on African and African American history and culture have been published in leading journals throughout the world. He served as a staff member of five different publications and was the co-founder and associate editor of the Harlem Quarterly (1949-1950). Among the many books he wrote or edited are American Negro Short Stories, William Styron’s Nat Turner: Ten Black Writers Respond (also published as The Second Crucifixion of Nat Turner), Malcolm X: The Man and His Time, Harlem USA, and African People in World History.

Julius Garvey is the youngest son of Amy Jacques Garvey and Marcus Garvey. He is a cardiothoracic and vascular surgeon. He lives in Sea Cliff, NY.

You may receive this eNewsletter directly in your email-box by subscribing. It may also be read on your Kindle ebook reader, or any device by downloading a PDF version. Enjoy our previous eNewsletters. Consider sponsoring our eNewsletter or a dedicated mailing.